The researchers assessed the long-term effects of chemical manipulations to the soil and the resulting effect of pH change on soil biodiversity and function.  The experiment involved applying amendments of ferrous sulphate and elemental sulphur. 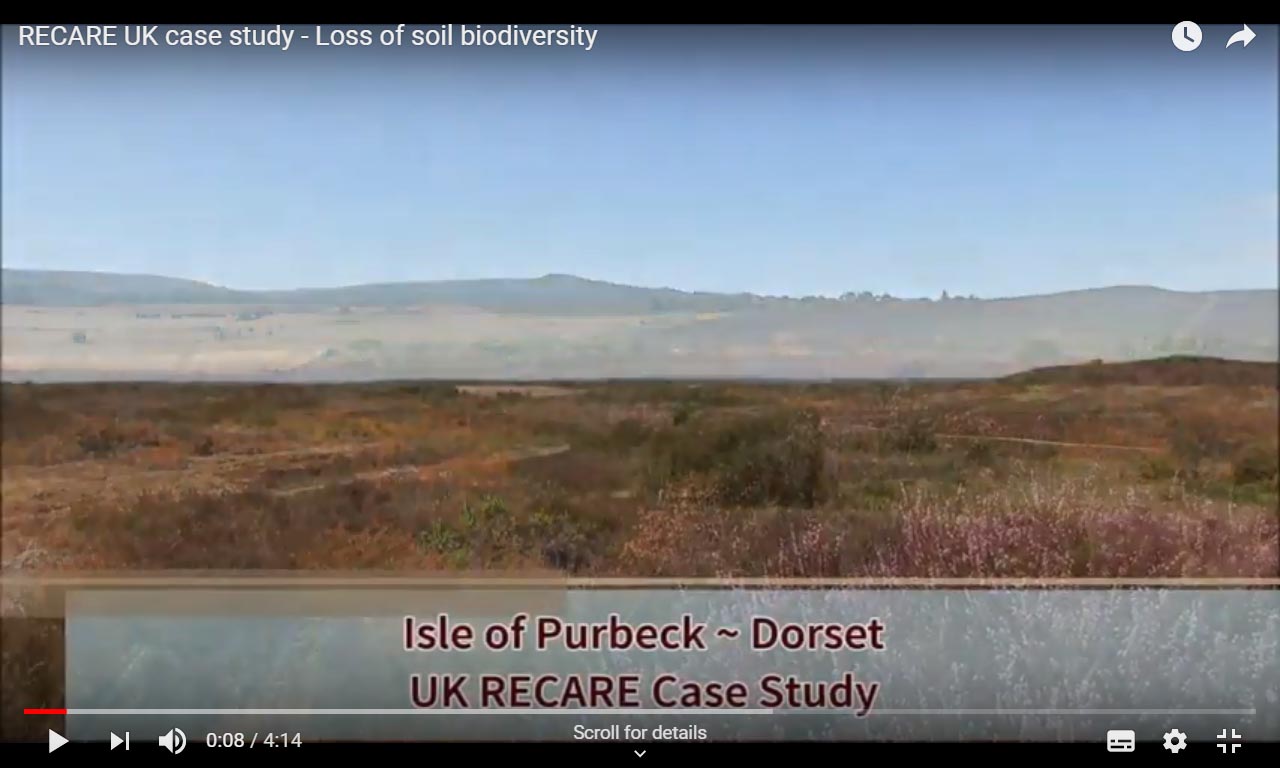 For more information about this RECARE experiment, please contact Mark Tibbett This email address is being protected from spambots. You need JavaScript enabled to view it.

The Isle of Purbeck is not a true island but a peninsula of ~200 km2 on the south coast of England. It lies to the West of The New Forest National Park and is in the County of Dorset. It has a mild temperate Atlantic climate with mean annual rainfall of around 777 mm.y-1 and an average temperature of around 11oC. Purbeck is a complex multifunctional, multi-land-use landscape with a range of competing pressures from arable farming, high and low-intensity livestock grazing, touristic land use with quarrying and military areas all expecting their share of the lands' ecosystem services. The soils are highly contrasting in pH, both naturally and through anthropogenic manipulation and are generally sandy to sandy loams, derived from a complex underlying geology.

Location and Digital Elevation Model (DEM) of the Isle of Purbeck (Source: SRTM).

The Isle of Purbeck is a multifunctional landscape with enormous pressure placed on soil resources due to the contrasting and competing land uses, past and present. The major soil threat here is a loss of soil biological function, linked to depleted biodiversity due to persistent physical and chemical manipulation of the land. Degradation has been caused by various means, most insidious is the large-scale manipulation of soil pH for competing agriculture uses which has led to heavy lime (and historic marl) application for arable land use, and subsequent intense sulphur application to reverse such previous alkalinisation. The latter was done to provide low-intensity grazing land, in keeping with the traditional and historic land uses of the area. This has led to a landscape with soil pH ranging from 3 to 8.5 often through artificial manipulation. The treatment of the soil in such a way has led to a clear loss in microbiological function where we have seen microbial biomass decline by one-half and biodiversity has been reduced by over two-thirds and where plant-microbe symbionts are absent or of the wrong type. The landscape has also been subject to other degrading activities including extensive recreational use in some areas, military disturbance (including the use of high powered ordnance) and quarrying. These have all contributed to a loss of biodiversity in the soil to varying degrees.

Other soil threats
The acidification has caused significant loss of microbial diversity and plant life leading to areas subject to soil erosion which can occasionally leads to complete top soil loss. The acidification has also led to the mobilisation of toxic metal cations in soils and run-off which provides additional threats to the effected sites and the surrounding environment (Green et al., 2007). Quarrying and military land uses alone have led to degraded soils that are poorly productive and fertile for reasons beyond biodiversity loss. Unrelated directly to biodiversity effects, but likely affecting biodiversity, the Case Study also includes areas that display significant soil erosion, as well as land degraded and threatened by coastal erosion and cliff failures.

The challenge is to rejuvenate the critical biodiversity in the soil after disturbance and this requires a detailed assessment of the functions that have been lost (nutrient cycling, symbionts, decomposition, pathogen control and so on). The relationship between diversity and function is not well established in soils generally; partly, at least, due to the large component of functional redundancy, and this will need to be assessed for our soils. The reintroduction of lacking diversity may require interventions such as inoculation, modified tillage, modified nutrient management and phytoremediation, depending on the initial results of the study.

Geology of the Isle of Purbeck is shown in the table below. Table below shows the area coverage of geological deposits, indicating that Tertiary sand, Jurassic limestone and clay, and drift over Mesozoic and Tertiary clay and loam constitute almost 60% of the study area. There is also an abundance of chalk deposits, which contribute to intensive quarrying activity in the area. 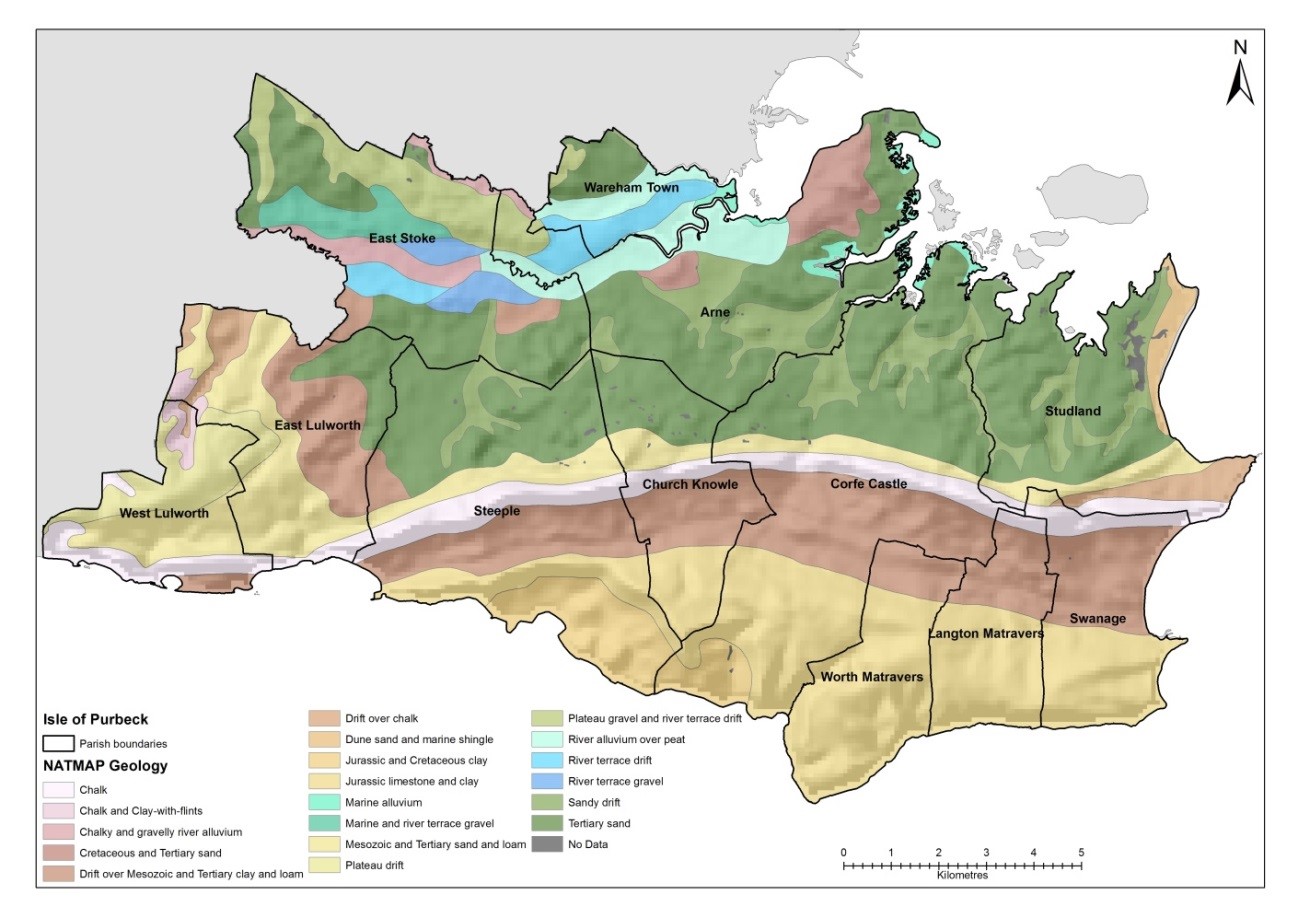 Distribution of main geological deposits within the Isle of Purbeck

The soils in the Isle of Purbeck are highly contrasting in pH, both naturally and through anthropogenic manipulation and are generally sandy to sandy loams, derived from a complex underlying geology. They are dominated by sandy and clayey soils oftentimes situated over chalk and limestone deposits. The following figure and table provide detailed information on the soils of the area. These soils are characterized by high organic carbon contents, with soils containing up to 2% of organic carbon constituting a relatively small portion of the area (see below). 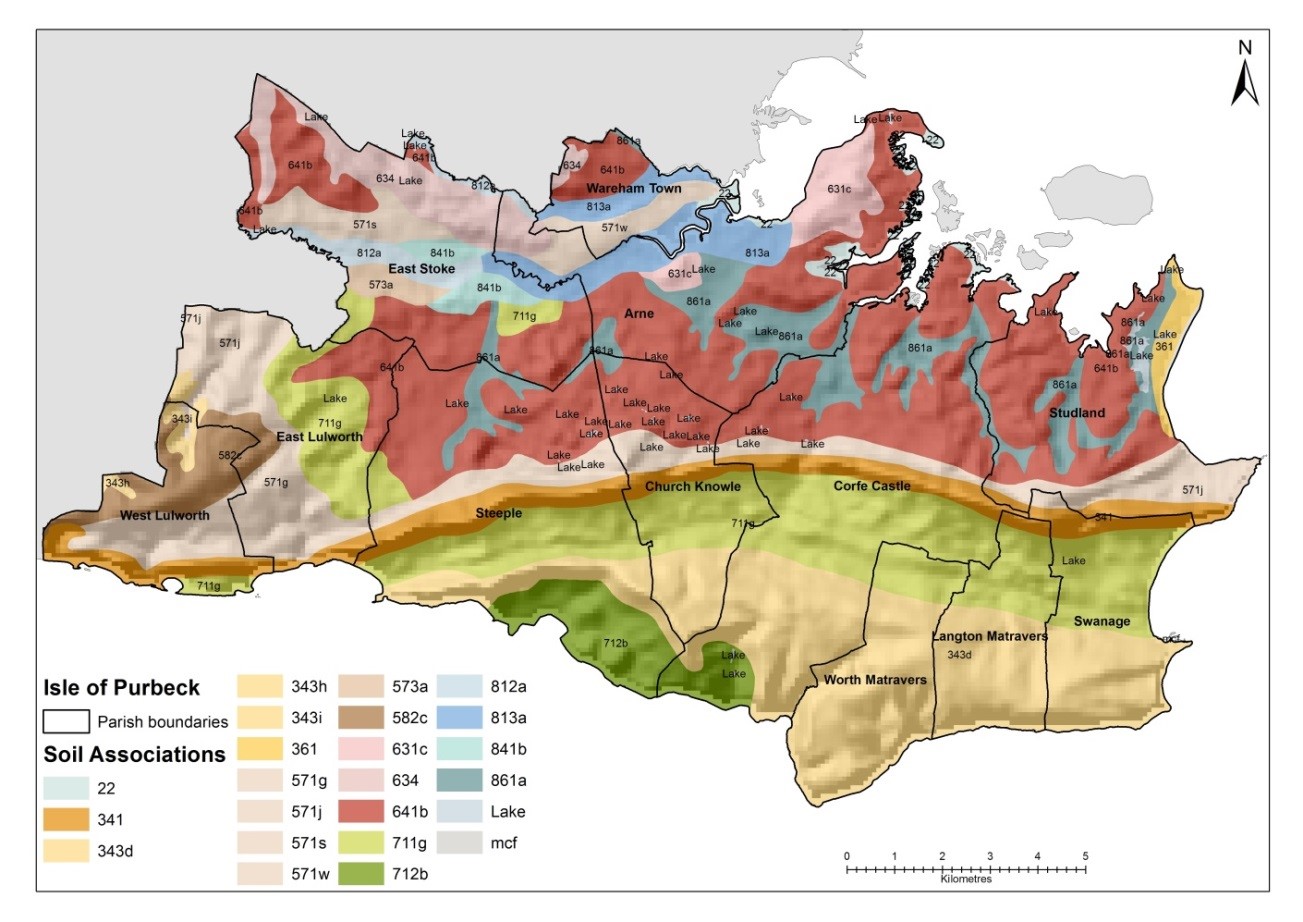 Soil associations of the case study area at mapping scale of 1:250 000. Explanations of soil association symbols are given below. Source: NSRI (2001) 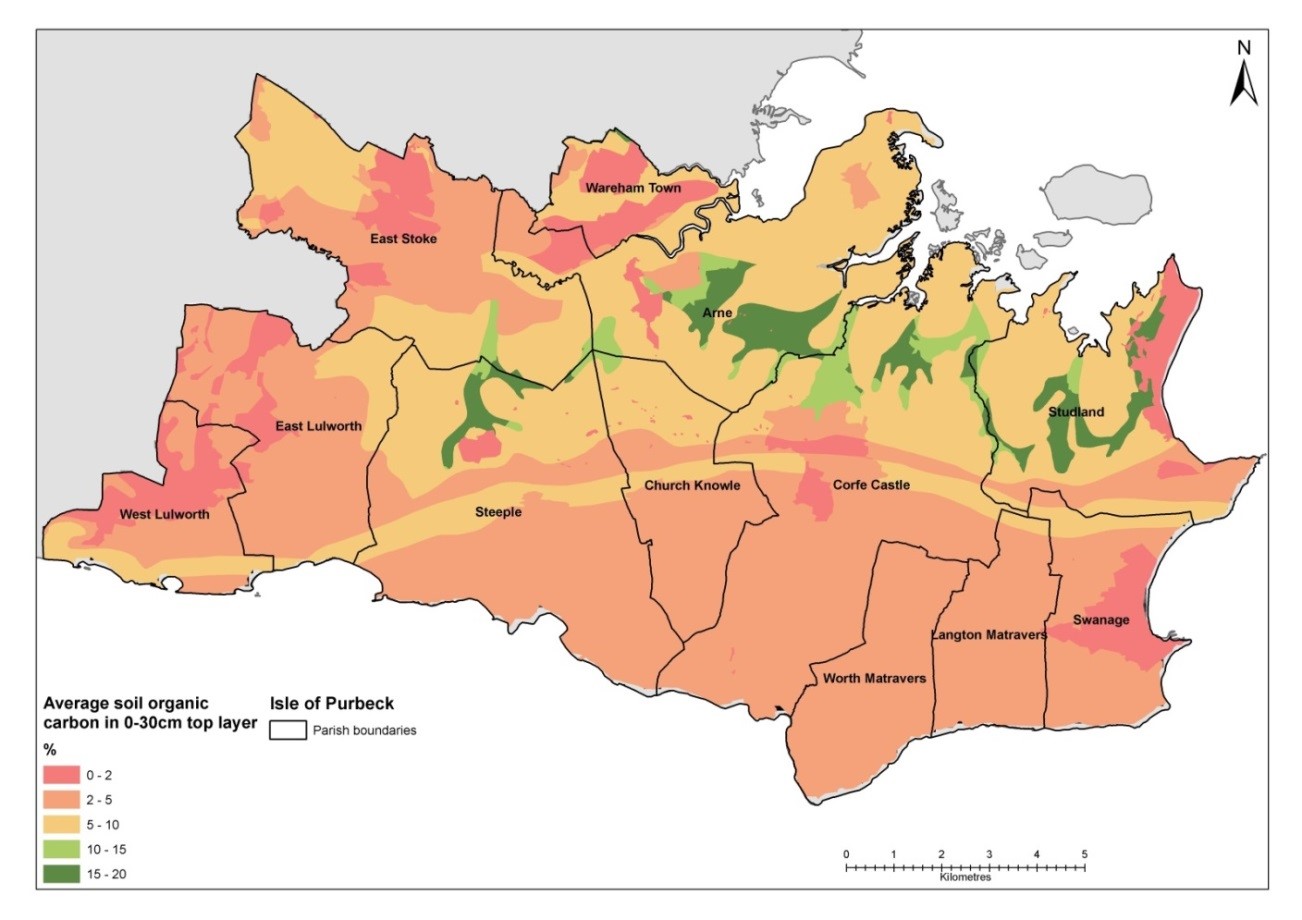 Land use of the Isle of Purbeck is dominated by pastures, followed by agricultural land and heathland (below). 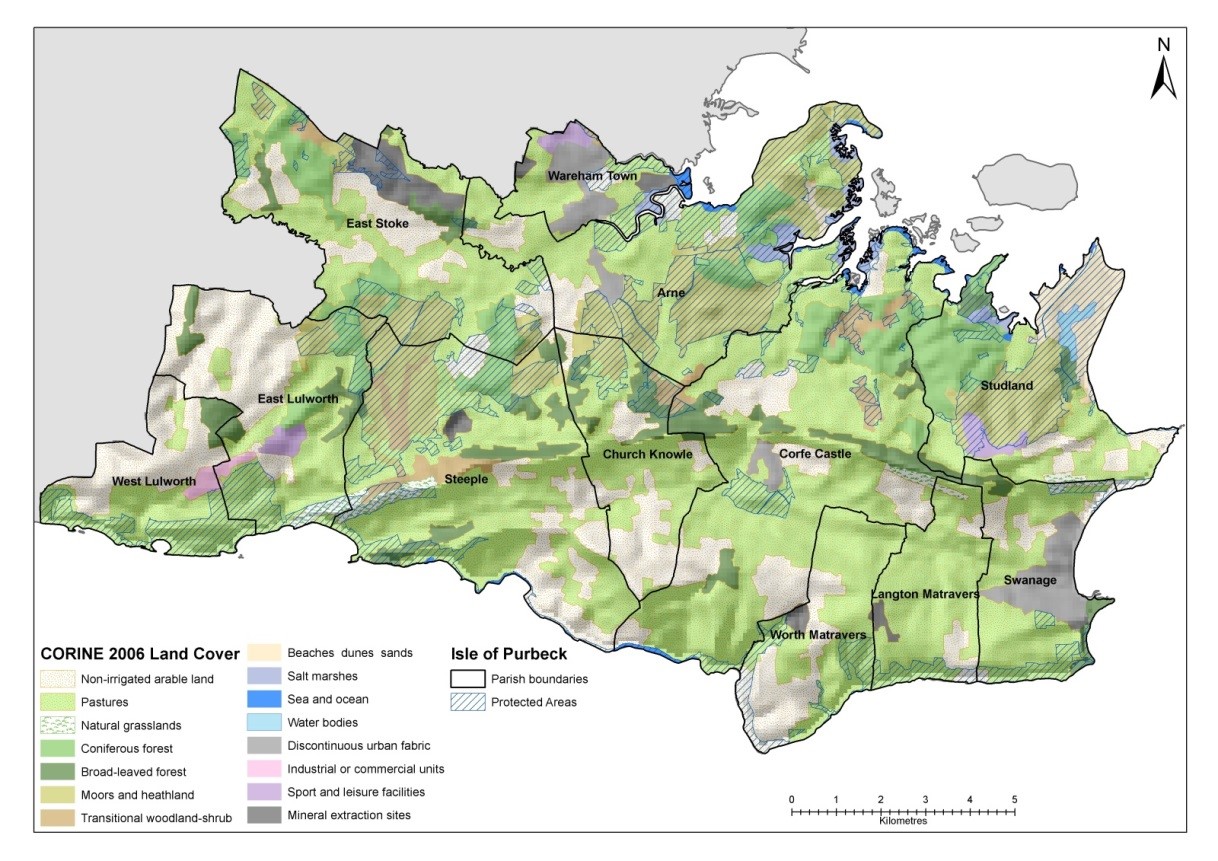 Major land use classes within the Isle of Purbeck case study area derived from the CORINE 2006 land use/land cover map (EEA, 2014). The black lines indicate the location of parishes. The protected areas comprise several datasets (see text for details) and were compiled from data obtained from the British Environment Agency (EA, 2014)

A fair part of the area is covered with either coniferous or deciduous woodland. Approximately a quarter of the area is under some form of protection, and a large part of Lulworth parishes is owned by the Ministry of Defence. Settlements are mostly discontinuous, with the largest concentration around the town of Swanage. The landscape has also been subjected to other degrading activities including extensive recreational use in some areas, military disturbance (including the use of high powered ordnance) and quarrying. 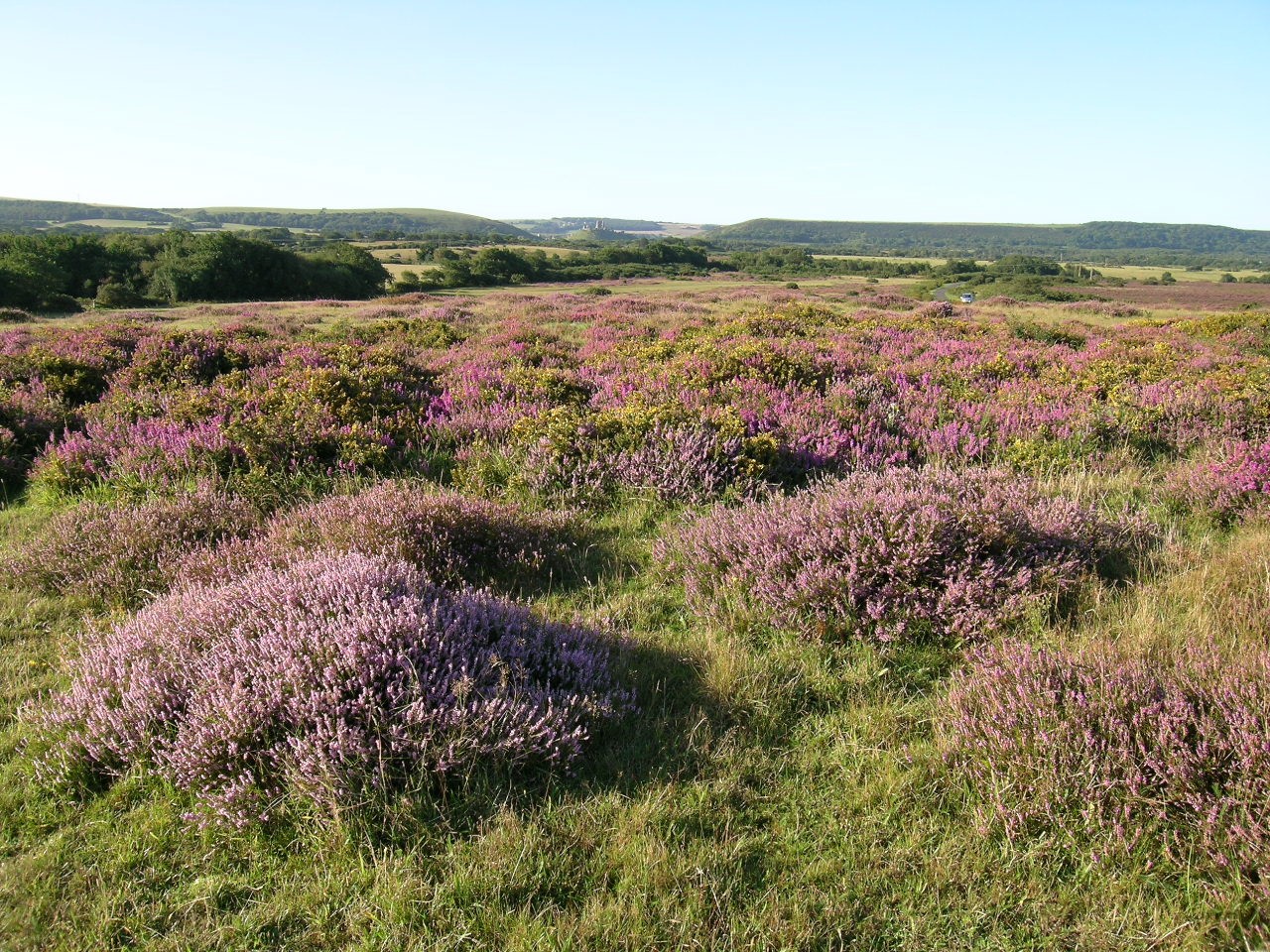 Image of Landscape Matrix in the Isle of Purbeck

The Case Study has a mild temperate Atlantic climate with mean annual rainfall of around 777 mm y-1 and an average temperature of around 11 oC.

The drivers to soil biodiversity decline are many and include many soil threat considered in RECARE. Many of the drivers related to the either the overuse of land (by people or animals) or changes in land management due to policies enacted at EU, National and regional levels. The major threats include: soil compaction on arable, woodland and pasture land, footpath erosion and compaction, soil sealing, coastal erosion, acidification of chalk hills by gorse, quarrying and salt blast (windblown salt from the sea). All of these impact on soil biodiversity.

Maps on the current state of land use, soil degradation and soil conservation in the case study area have been produced using the WOCAT (World Overview of Conservation Approaches and Technologies) methodology

The steps of this process are as follows:

1) The area to be mapped is divided into distinctive land use systems (LUS).
2) The team gathers the necessary data on soil degradation and conservation for each LUS using a standardised questionnaire, in close consultation with local land users, and supported where possible by remote sensing or field data.
3) For each LUS, the soil degradation type, extent, degree, impact on ecosystem services, direct and indirect causes of degradation, as well as all soil conservation practices, are determined.
4) Once collected, the data is entered in the on-line WOCAT-QM Mapping Database from which various maps can be generated.

Following the principles of all WOCAT questionnaires, the collected data are largely qualitative, based on expert opinion and consultation of land users. This allows a rapid and broad spatial assessment of soil degradation and conservation/SLM, including information on the causes and impacts of degradation and soil conservation on ecosystem services.

More details about the methodology used to produce these maps and their interpretation can be found here.

The "effectiveness" of conservation is defined in terms of how much it reduces the degree of degradation, or how well it is preventing degradation. The Effectiveness trend indicates whether over time a technology has increased in effectiveness.

Protected areas depicted in figure above are under a combination of several forms of protection. These are RAMSAR sites, Special Sites of Scientific Interest (SSSI), Special Areas of Conservation (SAC), and Special Protection Areas (SPA). RAMSAR sites are dedicated to protection of wetlands and waterfowl habitats. SSSIs aim at protection of sites hosting wildlife and notable natural features. SACs are areas that offer protection to wildlife and habitats as an initiative of an EU directive, and SPAs are dedicated to conservation of wild birds.

The challenge here is to rejuvenate the critical biodiversity in the soil after disturbance and this requires a detailed assessment of the functions that have been lost (nutrient cycling, symbionts, decomposition, pathogen control and so on). Generally, the relationship between diversity and function is not well established in soils, partly, due to the large component of functional redundancy. This relationship will need to be assessed for the soils of the Case Study. The reintroduction of lacking diversity may require interventions such as inoculation, modified tillage, modified nutrient management and phytoremediation depending on the initial results of the study.

Learning platforms for Stakeholders were be established in order to facilitate knowledge exchange and mutual learning between the different participants from local to national level. Open field days were held alongside a short course in remedial measures.