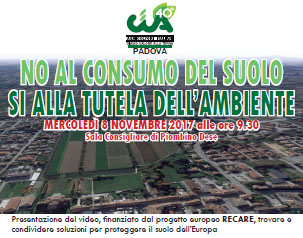 8th November 2017 Soil sealing - the covering of the ground by an impermeable material - is a serious soil threat. Soil sealing has important consequences for flooding, as water is no longer absorbed, food production, and the filtering and buffering capacity of soils and biodiversity, as well as other impacts. The EU has set a target to achieve zero net soil sealing by 2050, but soil sealing continues to increase annually. As part of the drive to spread the word about the problem and the urgency of caring for the soil, Professor Francesco Morari from Padova University and Mario Boldrin from Confederazione Italiana Agricoltori (CIA) organised a showing of the RECARE film about soil sealing (8/11/2017). The RECARE film features examples of soil sealing in Italy, and local farmers and Professor Morari explain the impacts of soil sealing in the Veneto region, a RECARE case study area (see the case study here). With invited speakers representing regional agricultural organisations and the local councils, it attracted not only over 100 hundred people to watch the film and discuss the topic, but also the regional TV company. The meeting featured on the local TV station 'Padova in diretta' relaying the concerns of about soil sealing to a broader audience. You can watch this film here. 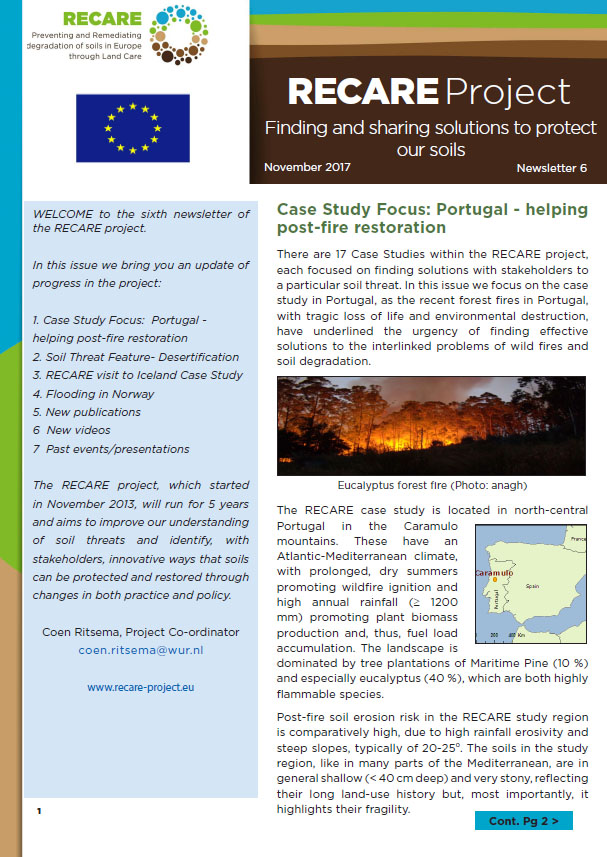 The sixth RECARE newsletter is now available and can be downloaded here. This issue covers:

24th October 2017 There has been a great deal of discussion about the use and extension of the approval of the use of glyphosate as a herbicide. Glyphosate is currently the most used herbicide in Europe. In 2016 the approval by the European Commission for the use of this agent expired. However, an extension of approval of use is currently being discussed. One of the conditions of this is that the agent cannot have a negative impact on the health of people, animals and the environment. Yet, little attention has been given to the presence of glyphosate in agricultural soil as a result of the broad use of this agent in agriculture. A scientific publication written by an international group of scientists led by Wageningen University & Research has recently been published in the journal Science of the Total Environment. This article contains the details of more than 300 soil samples taken from agricultural land in ten European countries, and argues against renewal of the approval of use of this herbicide.

31st August 2017, Wageningen Two presentations on the RECARE project were given at the Wageningen Soil Conference: Soil Science in a Changing World, which took place between 27th-31 August 2017.  Rudi Hessel, presented an overview of the RECARE project, whilst Hedwig van Delden gave a presentation on "Integrated assessment modelling for preventing and mitigating soil threats: The role of European policies, land use and land management"

6th October 2017, Portugal. The RECARE measures to prevent soil erosion in post-fire areas trialled in the Portuguese case study, are to be piloted as part of the Government's restoration plans to protect the burnt soils of the Pedrógrão Grande area affected by the devasting forest fires in June 2017.  The RECARE measures involve mulching the soil with pine wood or crushed eucalyptus (see here).  The Secretary of State for Forests, Miguel Freitas, reportedly said: "We will have to move very quickly. Erosion and waterproofing of soils are a threat to the region's natural resources that force us to race against time".  More information about the restoration plan can be found in this Portuguese news article or watch this TV broadcast (minute 30:15) from Jacob Keizer, the case study leader.  For further details about these measures, please contact Jacob Keizer This email address is being protected from spambots. You need JavaScript enabled to view it.